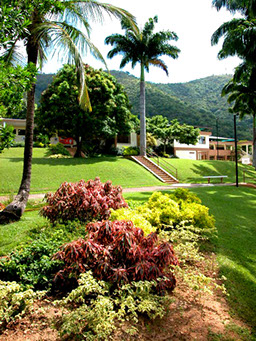 In 1958, a ten-classroom school was constructed in El Trigal, a residential sector of Valencia.  During the 1962-63 school year, a library, four classrooms, showers and dressing rooms, and a photographic darkroom were added.  In 1968, the High School building was constructed and was opened for classes on September 2, 1968.  The building consisted of two science laboratories, a computer laboratory, and classrooms, a lounge, and offices.  The High School library, constructed in 1968 and renovated in 2006, today houses 13,500 items.  A “comedor” and Middle School were added during the early 1980’s.  A multi-purpose recreational building was completed in August of 1988.  Most recently, two annexes, a lower primary building, a second Middle School level, and a maintenance complex were added in the mid 1990’s.

During 2004-2006 an Interactive Nature Trail was built behind the Elementary building and the North Annex.  This project includes a Dino Dig, a Tropical Mural, an Aquatic Habitat, Outdoor Classrooms and a Canopy Tower.

During the summer months of 2007 the Secondary Library was renovated and during 2008 the Elementary Library and P.E Locker Rooms were remodeled. A P.E. classroom and workout room were built next to the P.E. Office.

During the summer months in 2011, the plant improvement projects included: finished installing air-conditioning units in the Elementary classrooms and North Annex, electrical up-grades, installation of generators around campus, and security fences surrounding the school were raised.

Most recently, the cafeteria was enclosed and climate-controlled, and an Education Immersion Center was constructed, in which students collaborate during complex missions using 21st century skills using the most current in educational technology.

The enrollment has fluctuated between 200 and 480 students.